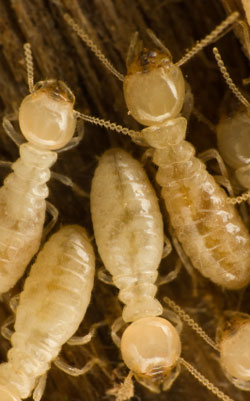 Termites are small 'S' bodied insects which are usually pale in coloring. They have fairly short antennae, which are straight and either threadlike or beadlike. The reproductive forms (swarmers), which fly, have two pairs of wings of equal length. Most of the time the wings are much longer than the body, but short-winged forms may also occur. Termites are different from ants in that they never have a constricted waist or elbowed antennae.

There are four or five castes in a termite colony, each of which has a specific role and a body type that corresponds with that role. The reproductive type are produced in large quantities in the spring (April or May, usually). They swarm from the colony and mate, after which they shed their wings and disperse to found new colonies.

The queens are relatively large and may live up to 10 years. They produce most of the colony's eggs. The worker caste is made up of the sterile adults and the nymphs of other castes, which do most of the constructing, nest tunneling and food finding. The soldier cast is responsible for defending the colony. They have large jaws, which are good for fighting but not for eating. They must be fed by the workers. Some termite species also have a type of soldier that can squirt a sticky liquid at intruders through a long thin snout.

While termites do a valuable service by breaking down wood and cellulose debris into soil, they can also do a great deal of damage to the structural integrity of a house. Colony sizes can range up to 1 million with a heavily infested acre of land containing 12 to 14 colonies. A mature termite colony, if only eating one structure, can eat 40 feet of 2x4s.

At Expediant, we utilize a product called Phantom, which is injected into the soil directly adjacent to the foundation. By mixing with the soil a passive barrier is created, which is transferred to the bodies of the termites that crawl through it. By grooming each other, the product is spread throughout the colony, eliminating it completely.