In New York we constantly get calls about flying and stinging insects. Although, insects behave similarly in almost all these areas, your situation might be different then others. That's why we offer Free Estimates for insect control in our service areas.

Get a FREE Quote!

These insects have the wasp-wasted form and long dangling legs that most people think of when the word wasp is mentioned. They are usually an inch or more in length and brown or reddish in color, sometimes with yellow markings. Their nests are typically a single tier of paper cells attached to the eaves of a building or similar surface by a short stem.

The habits of paper wasps in New York area are generally similar to those of the hornets and yellow jackets. Although they have a strong sting, they are not aggressive. They can be taken care of with a pesticide spray or dusting. 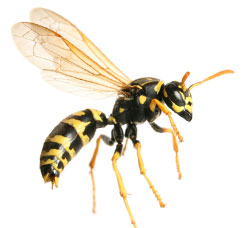 These are social wasps that have powerful stings and aggressive behavior defending their colonies. Since they are very common and frequently nest in or around buildings, they often have confrontations with their human neighbors.

All of these wasps build complex nests of paper that they make by chewing bits of wood or leaves. The most common are the round nests built by the bald faced hornet.

These are often found under the eaves of a house or barn, or hung from branches of trees and bushes. Most yellow jackets nest in the ground.

Like most insects they have a caste system made up of queens, males and sterile female workers.

Where the winter is harsh, all die except the queens who hibernate in walls, tree cavities, or other shelters. They begin new colonies by themselves the following spring.

The larvae are raised in the cells of the nest and are fed chewed up insects. These wasps do not hesitate to attack if they sense a threat. They can inflict a very strong sting that may cause an allergic reaction in some people.

These nests are usually exterminated with a pesticide dust. If you hear a scratching, crackling, or a faint buzzing sound, this could mean you have a nest inside your wall. ACT IMMEDIATELY; your safety could be at risk. Call or email us for a free estimate.

Bees can usually be distinguished by their all-over hair. Another characteristic of most bees is the enlarged flattened segments of the hind legs. One of these pairs of segments is typically fringed with long, stiff hairs and is used for carrying pollen. Bee nesting habits are similar to those of wasps.

One important difference is that bee larvae are fed honey and pollen instead of animal tissue. A colony of bees can reach a size in the tens of thousands, and while they are not overly aggressive, they can be dangerous if they are disturbed. A bee colony can be eliminated in the same way as wasps, but a bee suit is a must.

Carpenter Bees are similar to bumblebees with the exception of their abdomen, which is all black, shiny, and relatively hairless. The larger species chew nest burrows out of solid wood, sometimes damaging houses and other structures.

The easiest way to know if they are nesting in your home is to check for the fecal matter that they leave on the side of a building under their holes.

You can often see them hovering near their nest holes, engaging in territorial combat with others of their species.

Although house flies are an occasional home invader, they are more of a nuisance than pest. They should only be treated if you have a major infestation.

Unlike the house fly, cluster flies can cause a major infestation. They lay their eggs on earth worms and then filter into the house via wall voids.

Once an infestation has occurred, they may plague you for the rest of the season. A preventative house spray early in the season is the best treatment.